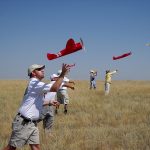 The essence of Free-flight is that the aircraft have no need for external control, for instance by radio. Aircraft of this type have been flown for over two centuries. They are designed to be inherently stable in flight; if disturbed by a gust of wind or a thermal current they will return automatically to stable flight. Their stability is achieved by a combination of design and trim, – the relationship between centre of gravity, wing and tail plane incidence and rudder setting. With their much lower wing loading, free-flight aircraft fly much more slowly than the engine-powered radio-controlled aircraft that many people first think of when ‘model aircraft’ is mentioned. Most of them glide at little more than walking pace and few weigh more than 500 grams. Usually the sole objective of free-flight competition is flight duration, and one of the sport’s fascinations and challenges is to design the most efficient aircraft within the various competition limits on parameters such as minimum weight, maximum wing area, and motive power. 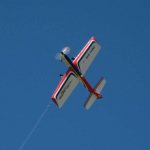 Control line (also called U-Control) is a simple and light way of controlling a flying model aircraft. The aircraft is connected to the operator by a pair of lines, attached to a handle, that work the elevator of the model. This allows the model to be controlled in the pitch axis. It is constrained to fly on the surface of a hemisphere by the control lines. The control lines are usually either stranded stainless steel cable or solid metal wires of anywhere from 0.008 in (0.20 mm) to 0.021 in (0.53 mm). Sewing thread or braided fishing line may be used instead of wires, but air resistance is greater. A third line is sometimes used to control the engine throttle, and more lines may be added to control other functions. Electrical signals sent over the wires are sometimes used in scale models to control functions such as retracting undercarriage and flaps. Almost all control-line models are powered with conventional model aircraft engines of various types. .

A radio-controlled aircraft (often called RC aircraft or RC plane) is a small flying machine that is controlled remotely by an operator on the ground using a hand-held radio transmitter. The transmitter communicates with a receiver within the craft that sends signals to servomechanisms (servos) which move the control surfaces based on the position of joysticks on the transmitter. The control surfaces, in turn, affect the orientation of the plane. Flying RC aircraft as a hobby grew substantially from the 2000’s with improvements in the cost, weight, performance and capabilities of motors, batteries and electronics. A wide variety of models and styles is available.Scientific, government and military organisations are also using RC aircraft for experiments, gathering weather readings, aerodynamic modelling and testing. Distinct from recreational civilian aeromodelling activities, Unmanned aerial vehicle (drones) or spy planes add video or autonomous capabilities, are used for public service (firefighting, disaster recovery, etc.) or commercial purposes, and if in the service of a nation’s military, may be armed.

ALL PHOTOS USED ARE STOCK IMAGES